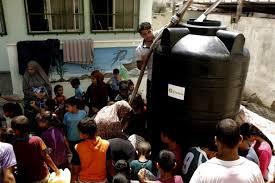 “The people in Gaza are not able to use the water coming into their houses for drinking; they use it for household ends, but for drinking they have to rely on trucks,” Ghosheh said in the press release [....]

There are differences of opinion among Palestinian water specialists regarding the desalination solution. Supporters are convinced that it will decrease Gaza’s dependence on Israel. Opponents, though, are concerned about the environmental damage; argue that the dependence will always exist with regard to the entry of building materials and replacement parts; and warn that, from a practical perspective, the inhabitants of Gaza will not be able to bear the costs by themselves (desalinated water is more expensive). In addition, the fact is that a facility of this sort requires a steady supply of about 25 megawatts of electricity – the source of which remains unclear.